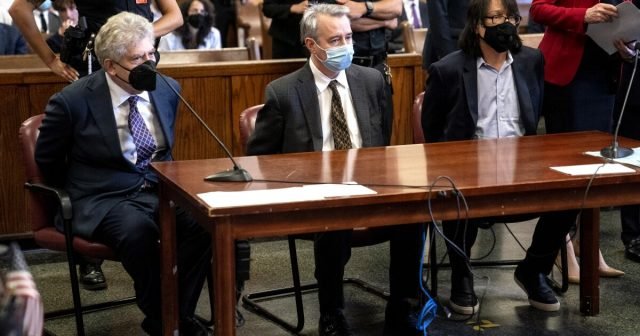 Attorneys for the three men charged for their roles in attempting to sell memorabilia stemming from the creation of the Eagles’ landmark “Hotel California” album, including Don Henley’s handwritten lyric sheets for the title track, filed motions on Wednesday requesting to have the case thrown out.

The motions to the Supreme Court of New York, on behalf of Glenn Horowitz, Craig Inciardi and Edward Kosinski, cited a variety of reasons for dismissal, including statute of limitations, violation of due process, insufficient evidence and unlawfully obtained evidence.

“The People have turned to very creative theories of prosecution,” wrote Horowitz’s attorney, Jonathan Bach, in his motion, “straining to make out a non-existent case.”

Charges were filed against the defendants in July by the office of Manhattan District Attorney Alvin Bragg, setting the groundwork for a high-stakes trial uncommon in the rare-memorabilia world, where disputes often are settled via civil litigation rather than criminal.

Horowitz, a major figure among literary archivists, is being charged with conspiracy, attempted criminal possession of stolen property and hindering prosecution; he faces up to 15 years in prison. Inciardi and Kosinski, who both specialize in rock memorabilia, are being jointly charged with possessing stolen property and conspiracy; each faces up to 25 years in prison.

The saga of the “Hotel California” lyric sheets begins in the late 1970s, when author and musician Ed Sanders was hired to write an official Eagles biography, which was never released. In 2005, “Individual 1,” as he’s referred to in the indictment, sold around 100 pages of Henley’s handwritten lyric sheets for songs from 1976’s “Hotel California” album to Horowitz. While “Individual 1” is not being charged and remains unnamed in the indictment, the new motions from the defendants’ attorneys name Sanders as the author who initially sold the documents for $50,000. (The indictment valued the documents at over $1 million.)

According to the D.A.’s office, Horowitz subsequently sold the material to Inciardi and Kosinski, who both then attempted to sell the items via different auctions. This drew the ire of Henley, who demanded the return of the material, which he claimed was stolen. “Despite knowing that the materials were stolen,” the D.A.’s original press release read, “the defendants attempted to sell the manuscripts, manufactured false provenance, and lied to auction houses, potential buyers, and law enforcement about the origin of the material.”

In turn, the defendants’ lawyers maintain that the papers were never actually stolen in the first place, since Sanders, the source of the documents, is not being charged. “The People have assured Ed Sanders, the origin of this odyssey, that he has done nothing wrong,” writes Stacey Richman, Craig Inciardi’s attorney, in the filing for her client. “He has been assured he will not be arrested and despite requests, the People have refused to identify Mr. Sanders as an unindicted co-conspirator. Mr. Sanders has averred that he did not steal the lyric pages.”

“If the People’s view is that Mr. Sanders is not a thief,” writes Antonia Apps, Kosinski’s attorney, in her filing, “the Court should dismiss the Indictment in its entirety, because the gravamen of the crime of criminal possession of stolen property is that the property being possessed was in fact stolen.”

Apps also asserts in her filing that Henley approached the D.A.’s office “to do his bidding” only after the opportunity to pursue any civil claim had expired.

“Hotel California” is the second-bestselling studio album of all time in the U.S., trailing only Michael Jackson’s “Thriller.”

If the defendants are found guilty, Henley — who already purchased an initial swath of “Hotel California” lyric pages in 2012 for $8,500 — will be given the remaining documents in the set, according to the D.A.’s office.

In regard to the new filings this week, the D.A.’s office did not immediately return a request for comment. A hearing for the case is scheduled for Oct. 14.