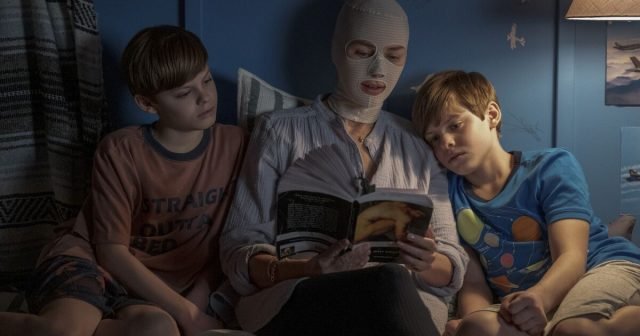 The 2014 Austrian horror film “Goodnight Mommy” is a modern genre classic: a deeply disturbing tale of dread, with a sucker-punch twist and several scenes of almost unbearable suspense. The new English-language remake — directed by Matt Sobel from a Kyle Warren screenplay — softens some of the original’s more extreme moments, but keeps most of writer-directors Veronika Franz and Severin Fiala’s major plot points. Because of this, fans of the first “Goodnight Mommy” may find it a pale, pointless copy. Newcomers, though? They should be suitably creeped out … but, alas, not wrecked.

The best thing the new version has going for it is its star. Naomi Watts plays a recently divorced mom who’s also an aging celebrity, with her head wrapped in a bandage for half the film due to cosmetic surgery. Because Mother’s face is hidden, her visiting son Elias (Cameron Crovetti) and his twin brother, Lucas (Nicholas Crovetti), become convinced she’s an imposter. It doesn’t help that she’s moodier and chillier than she used to be, or that she’s designated parts of her country estate as off-limits.

Watts is terrific in “Goodnight Mommy,” capturing the same ambiguity and anxiety that marked Susanne Wuest’s original performance. If the twins are wrong about Mother, they’re behaving incredibly cruelly toward her — although her behavior isn’t much better, given how often she snaps and screams. Either way, there’s a tragic dimension to this spook-show.

Sobel and Warren preserve their source material’s shocking third-act reveal, and they restage many of the tense sequences of the kids sneaking about and gathering evidence. But this “Goodnight Mommy” pulls back too much from the violence and torture that made the original such a sublime ordeal. This is still a disturbing story about what happens when the emotional gulf between parent and child becomes unbridgeable. But this time, the trouble feels more theoretical than visceral — like the fading memory of a grave threat.

Neil LaBute was an acclaimed playwright before he became a filmmaker, and while throughout his directing career he’s dabbled in comedy, horror, action and science fiction, he’s always been at his best as a dramatist, exploring the infinite possibilities of a few people sitting in a room, just talking. His latest, “House of Darkness,” combines his accomplished stagecraft with his penchant for genre play, for a modestly scaled dramedy that riffs on the mythology and the underlying seductive appeal of vampires.

Justin Long plays Hap Jackson, a smarmy business consultant and incorrigible lothario who at the start of the movie drives Mina (Kate Bosworth), a woman he picked up at a bar, home to her remote gothic mansion, where she lives with Lucy (Gia Crovatin). What follows is a lot of conversation — some of it suggestive, some of it uncomfortably pointed — as Hap tries to figure out whether either lady is going to have sex with him, while they try to get him to be honest about what kind of man he really is beneath his “nice guy” act.

Anyone familiar with the “Dracula” legend should recognize the names Mina and Lucy, and it shouldn’t take long to figure out that the women in this house of darkness have ominous plans. But while the material here is thin and largely predictable (aside from one great jump scare), the cast is outstanding and the dialogue is snappy, delivered at a brisk pace. If nothing else, “House of Darkness” is distinctive. This is very much a Neil LaBute vampire picture, where the foxy predators won’t drain their victim’s blood until they’ve made him feel like a real jerk.

‘House of Darkness.’ R, for some bloody violence/gore, sexual material and language throughout. 1 hour, 28 minutes. Available on VOD

Early in the teenage melodrama “Do Revenge,” as a way of tipping a cap to one of its primary inspirations, one of the two leads is seen reading Patricia Highsmith’s “Strangers on a Train,” a classic thriller novel about two desperate people trying to solve each other’s problems via murder. The scheme in “Do Revenge” isn’t quite as bloody as Highsmith’s, though. Here, two Miami private school kids — both publicly embarrassed by their peers — conspire to cozy up to each other’s enemies, to learn their secrets and ruin their lives.

The antiheroes are played by two powerhouse young actors: Camila Mendes as Drea, a scholarship student who transformed herself into the school’s wicked queen before her downfall; and Maya Hawke as Eleanor, a nerdy queer girl who has to become someone she’s not in order to join Drea’s former clique. As is often the case with stories about revenge and deception, the two ladies find their goals and alliances shifting as they get deeper into their respective cons.

Jennifer Kaytin Robinson — the creator of the similarly sassy MTV series “Sweet/Vicious” — directed “Do Revenge,” and co-wrote it with Celeste Ballard. Their story gets unwieldy at times, with so many side characters and twists that what should be a short, punchy, offbeat caper picture lumbers to a nearly two-hour running time. But the movie’s bright colors and trappings of wealth offer some nice eye candy. More importantly, Mendes and Hawke bring a lot of depth and pathos to these characters, who gradually begin to wonder why they and their classmates are so fiercely dedicated to punishing each other.

At the start of Hiroyasu Ishida’s animated feature “Drifting Home,” a group of Japanese schoolchildren — some friends, some rivals — sneak into an abandoned apartment complex they’ve heard is haunted. Then a torrential downpour floods the surrounding streets, dislodges the building and sends the kids floating out to sea, where they have to scavenge food from the other floating buildings they pass. Oh, and it turns out there actually is a ghost, hanging around and watching them.

This may sound like an odd, overcomplicated premise for a movie, but it’s in a similar vein to other popular anime films like “Weathering With You” and “Mirai,” where young people navigate an unsettled world as the lines between reality and fantasy — and stability and catastrophe — get blurry. Like those films, “Drifting Home” allows the disasters and the magical realism to set the stage and drive the plot, while Ishida and his co-writer, Hayashi Mori, tell a more personal story about children feeling anxious and alienated.

The biggest conflict in “Drifting Home” is between former best friends Kosuke and Natsume, who have been chilly to each other ever since they both moved away from the same apartment complex that’s now become their oversized life raft. As they work together to survive, they reconnect. The deep strangeness of “Drifting Home” can take some time to adjust to. But in this quirky and boisterous picture, the surreal predicament is ultimately just an offshoot of these kids’ common fears about growing up.

Available now on DVD and Blu-ray

“The Amusement Park” is a recently rediscovered 1975 educational film from the late, great “Night of the Living Dead” director George Romero, who was asked to illustrate the horrors of ageism and proceeded to deliver a bleak one-hour nightmare about elderly men and women navigating a cruel, confusing fun fair. The new Blu-ray edition includes a commentary track and multiple featurettes explaining this unusual project. Shudder

Despite Financial Woes, Snap Inc. Will Stay Independent And Not Seek To Be Acquired,...

Fan Dies After Fall From Escalator At Pittsburgh Steelers Game