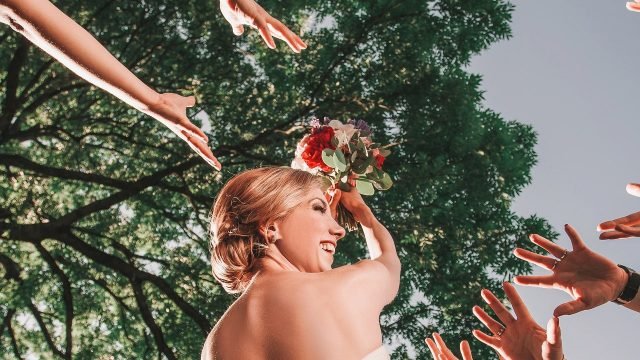 Piece of cake: Next person to get a dental filling.

Wedding rings: Next person to get two new piercings and a fun story to tell at parties.

Wedding dress: Next person to get something that cost a lot of money which they can never use but must keep in their closet forever.

Baseball: Next person to misunderstand the situation, think that they’re playing catch, throw the ball back, and hit the person who first threw it, resulting in memory loss that erases the entire wedding.

Bowling ball: “Ladies and gentlemen, I give you the next bowling champion of Utah!”

Meatball: Next person to have a nice little snack.

A dead bird: Next person to go to K.F.C.

A machete and a hockey mask: Next person to go on a murderous rampage or the next person to win a Halloween-costume contest.

Blood: Next biotech visionary who will take up the mission of Elizabeth Holmes.

Folding chair: Next person to wrestle in the W.W.E.

Pair of old shoes: Next person to pretend to accidentally leave a pair of shoes at a wedding.

Brick: Next person to get married to a brick.

Flowers that suck: Next person to get married to someone who sucks.

Flowers that are O.K.: Next person to get married in Oklahoma.

Flowers that are fake: Next person to be transported to the E.R. with a plastic flower lodged in their windpipe.

Marriage license with one of the names not filled out and a pen: Next person to return it to you and say that they can’t marry you because obviously you are meant to marry the person you were engaged to—that’s what this whole ceremony is for. And also next person to tell you that if you don’t want to go through with the wedding, that’s totally fine, they will of course still love you (as a friend), but that throwing a marriage license and pen like that really isn’t a kind or mature way to deal with your feelings.

A Daily Walk to Friendship

‘Riverdale’ Actor Ryan Grantham Afraid He Could Be Brutalized in Prison